Backhoe vs Excavator: What is the difference and which is right for you? 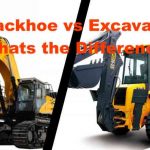 Backhoe Loaders and Excavators have a similar general function -they are both diggers, but they have differences in design and versatility that make each of them them better suited to different jobs. Choosing the right construction equipment for the requirements is important for any project, so we’ve gone and written up this excavator vs backhoe comparison.

Excavators as their name would suggest are purpose built for excavating. They have a large arm attached to a cab, both of which can rotate 360 degrees atop the undercarriage. Excavators come in wheeled and crawler variants.

Backhoe loaders are multi-functional machines built on a tractor chassis with a front end loader, and a rear excavator-style arm called a backhoe. The backhoe is limited in its rotation to a range of about 200 degrees. The backhoe itself consists of a bucket on the end of a hydraulic arm known as a dipper stick and boom that extends from the back of the tractor chassis.

Wheel excavators exist, but most excavators are tracked, therefore more capable in rough terrain and mountainous environments such as mining sites. Backhoe loaders are wheeled and can drive on roads, making them a good choice for projects with more than one work site.

Backhoe loaders are more versatile machines than excavators. The front end loader allows for loading jobs to be performed, and the backhoe bucket can be swapped out for a large variety of implements like breakers, drills and hammers. The front end loader can also be swapped out for plows or forklifts. Excavators can use other hydraulic implements in place of the bucket, but the number is much smaller.

Newer mini excavators can now perform many of the functions that backhoe loaders can, however backhoe loaders continue to be used as versatile machines for farm and small-medium construction projects.

Backhoe vs Excavator - which one is better for your project?

Its important to consider your project’s scope when choosing equipment. For larger scale projects with a heavy workload, an excavator is probably the way to go. If the project is smaller, a backhoe loader can carry out excavation functions whilst offering more versatility.

Of course if you are still unsure which is more suitable, ask an expert. We at CamaMach have years of experience and are happy to help, send us an email and we can make recommendations based on your site plans and requirements.

Looking for excavators? We have a selection from top brands like XCMG and SANY

Or if you are after a backhoe loader our catalogue includes SDLG, XCMG, and Lovol among others.

This entry was posted in Camamach, Products and tagged excavator, backhoe, comparisons, excavator vs backhoe on August 21, 2019 by admin. ← Previous Post Next Post →